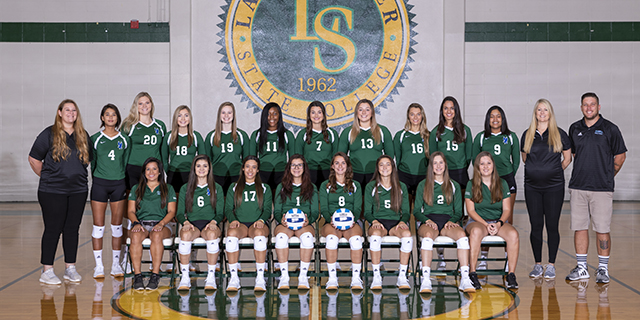 The #15 ranked 2019 Lakehawks Volleyball team with their coaches.

Charlotte, NC – With the 2019 season set to start up in a little over 24 hours, news out of the NJCAA National Office has the Lake-Sumter State College Lakehawks ranked in the top 20 for the first time in program history.

The NJCAA released their 2019 preseason poll Monday afternoon which highlighted the top teams in DII throughout the country. For the first time, LSSC found themselves in the thick of things. After a stellar season last year, that resulted in an 11th place finish at Nationals, the Lakehawks will begin the season ranked No. 15 in the country.

Coffeyville Community College (KS) remains the No. 1 team in the nation after winning back-to-back National Championships. Conference foe, Pasco-Hernando State College also received votes and will begin the year 16th in the top 20.

With one of the toughest regular season schedules at the DII level, Lake-Sumter will face off against several nationally ranked programs throughout 2019. Catawba Valley Community College (NC) came in ranked No. 5 and will meet up with the Lakehawks at the Pasco-Hernando Bobcat Invitational Saturday, September 7. Outside of the team’s DII schedule, they will also take on DI preseason poll No. 7 Polk State. Santa Fe College and Central Florida are both on the docket this year and were ranked nationally throughout 2018.

For a team that went to Nationals last season and never received a vote, the coaching staff is keeping the excitement to a minimum on the Leesburg campus.

“It’s exciting for the girls and a testament to the 2018 team and everything they accomplished and the message they sent when it was all said and done,” said Interim Head Coach, Nate Camnitz. “The 2019 team still has not accomplished anything this season and for them, this means they are now the team to beat and teams are going to be out to get us.”