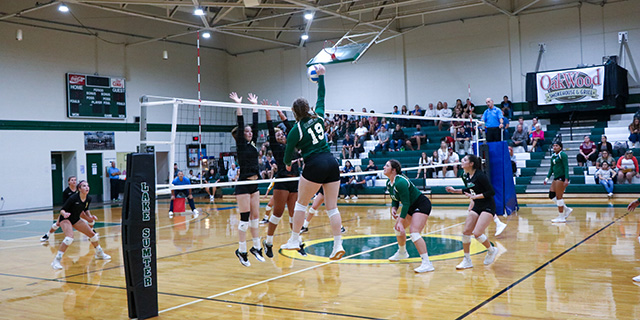 After a rocky start to the conference schedule, the Lake-Sumter State College volleyball team got back on track Wednesday with a win over Pasco-Hernando State College.

After several prize fights throughout the 2018 season, the Lakehawks and Bobcats met up for the first time this year. The last time these two teams met, LSSC had upset the top seed in the Regional/District Tournament, punching their ticket to Nationals

The first set of the night was everything you would expect between these two programs. A back and forth battle ensued with the Lakehawks winning in extra points, 28-26. PHSC got up big in set two, taking a 24-16 lead at one point before Lake-Sumter mounted a comeback. It was too little, too late with the Bobcats knotting the match up at one set each, 25-22.

Everything clicked for LSSC in the next two sets looking like a well-oiled machine. Set three was a 25-14 victory with several key blocks along the way. Jumping out of the gate to a 7-0 lead in set four, the Lakehawks watched as the Bobcats clawed their way back into the game to tie it up at 11-11. Massive kills from Skylar Martin and Aleisha Marcano helped get their team up for good, claiming the set and match, 25-19.

Star Lakin put up 25 assists on the night, her second highest mark this season. Hailey Franklin was all over the court Wednesday collecting six kills, four digs and four blocks on her way to a nine point night. Hannah Yarbrough continues her solid freshman campaign with 19 digs to her credit. The team as a whole put up 16 blocks against the Bobcats, the most on the season.

Currently, the Lakehawks (2-6, 2-2) are sitting third in the Sun-Lakes Conference. The team will head to Gulf Coast (12-4, 3-1) this weekend. Gulf Coast is currently second in the conference.