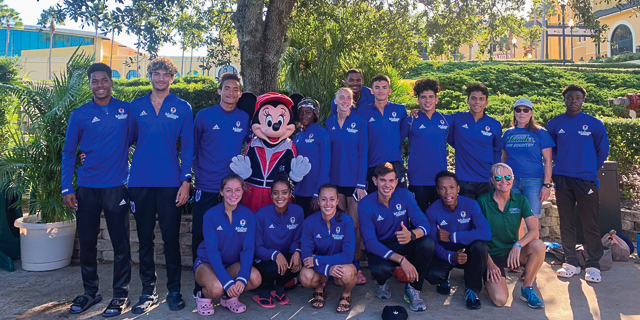 The men’s team competed in a field of 12 different college programs ranging from NJCAA to NCAA Division I. Over 120 runners participated in the 8k race. Alexander Croy and William Troupe finished back-to-back in 21st and 22nd place, respectively. Both student-athletes ran personal bests and got under the 28 minute mark for the first time this season.

As a team, Lake-Sumter finished eighth overall, but had a solid day on the course. “The men ran really well, running as a team,” said Head Coach, Cristy Snellgroves. “All athletes on the team either ran personal bests or came close to it.” Jolicaisse Guzman shattered his previous personal best time by two minutes on the way to the best run of his season.

There were over 150 runners on the women’s side of the action Saturday. Brianna Mitchell, Isabel Panganiban and Neelyam Lugo Ramos all reached their season-best performances at Disney. Mitchell dropped her previous top time of 26:04 to 24:40 over the weekend. Lugo was the top finisher from LSSC, coming in 79th.

In true Disney spirit, Snellgroves had this to say about the event, “‘A true hero isn’t measured by the size of his strength, but by the strength of his heart.’ Zeus, from Disney’s Hercules. This team indeed has huge heart! Competing against teams from all over the country, the team had an overall impressive performance with over half the athletes achieving season-best times. All the more impressive, coming off the back of a heavy training period, where these athletes have pushed themselves and each other.”

Both cross country teams are putting out their best performances with the NJCAA Region 8 meet that will take place at Apalachee Regional Park in Tallahassee on October 25th.