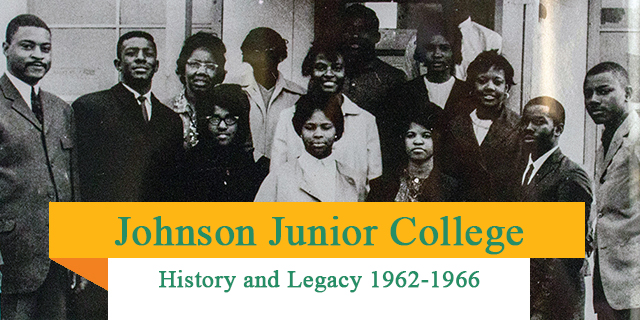 Through the efforts of citizens of Lake and Sumter counties, Johnson Junior College was established by legislative act in 1961 (via HB 929 and SB 147) and opened its doors to students on September 4, 1962 from the grounds of Carver Heights High School in Leesburg with Perman E. Williams as the first – and only –President of the college. Williams had previously been employed as the Supervisor of Negro education in Lake County and he had also served as principal of JRE Lee High School in Wildwood. Williams stated in an interview that he felt it was an oustanding challenge to be President of Johnson Junior College, and that it was needed for the black community.

JJC was one of only twelve black colleges in Florida, created by legislature in the years before the 1964 Civil Rights Act, and in its short, four year existence, the school graduated nearly 400 students. The college was named after John Wesley Johnson, principal of the first black high school in Leesburg, and the Williams-Johnson building on the LSSC Leesburg campus still bears the names of Perman Williams and John Johnson fifty-nine years later, a clear indication of the lasting legacy of this historic black college.

The college operated its classes on the Carver Heights High School campus, today the site of Carver Middle School, and enrolled 100 fulltime students their first year alone, attracting students from near and far.
The college offered a multitude of programs for local students, including traditional general education and specialty programs like pre-agriculture, pre-business administration, pre-engineering, pre-law, and pre-dental and pre-nursing. Within two years, the college moved to permanent facilities located adjacent to Carver Heights High School. The college served over 400 students of Lake, Sumter, Hernando, Orange, Osceola, and Seminole counties during its limited existence.

In addition to programs, the college offered a robust student life experience, including many clubs and organizations during its time. From the Spanish Club, to the Fine Arts Club, to the Johnsonian newspaper staff, the college offered its students numerous extracurricular outlets to be involved with college life and with the surrounding community.