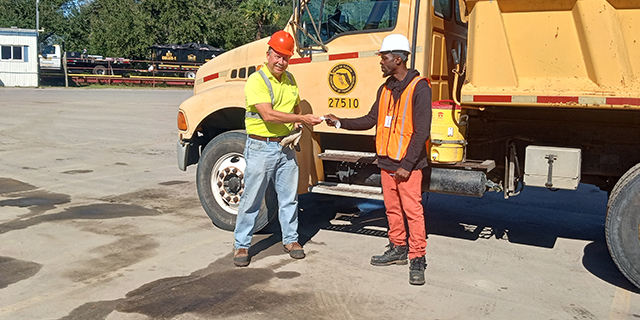 Bill Wilkins, left, with his coworker at the Florida Department of Transportation. (Photo Courtesy: Bill Wilkins)

William “Bill” Wilkins began his CDL training with two goals in mind:  to be able to create a better work-life balance and have a stable plan for the future.

Wilkins, who was born and raised in Central Florida, didn’t always plan to be a truck driver. However, after spending 30 years working in retail, banking, and home improvement, he decided it was time to change lanes and take a new exit toward a career with a bright future.

“Obtaining that Class A license was like the golden ticket,” says Wilkins. “I know that sounds a little bit corny but that certification through LSSC was my golden ticket to get my job today.”

Wilkins is now a Heavy Equipment Operator for the Florida Department of Transportation (FDOT), and his work varies from day to day. Whatever roadway project FDOT is working on, Wilkins is there to help make it happen.

Just recently, he was redeployed to assist with priority projects cleaning up debris from Hurricane Ian to re-open roadways in Central Florida. Wilkins was recognized by FEMA for his work in removing a significant amount of debris from State Road 44 in Lake County.

With three weeks of training at Lake-Sumter State College and his new job at FDOT, Wilkins is well on his way to achieving his two goals.

“Receiving my CDL and working at FDOT has given me greater work-life balance,” he says. “With a consistent schedule, benefits, and a retirement plan, I feel like I have a great career path and can see my future into retirement.”

Outside of work, he spends his time kayaking, doing home improvement projects, reading, and helping to care for his parents.

Wilkins greatly appreciates the employees at LSSC, who assisted him in enrolling in the program.

“I’m very appreciative to LSSC, particularly Angela in the Continuing Education office and Rebecca from CareerSource Central Florida,” he says. “I filled out the paperwork but those two put it all together and made it happen for me.”

His advice for students would be to connect with a member of LSSC that will support you through the classes you need and help set you up for success in that future role. Wilkins says that without LSSC, he wouldn’t be where he is today and where he will be in the future.