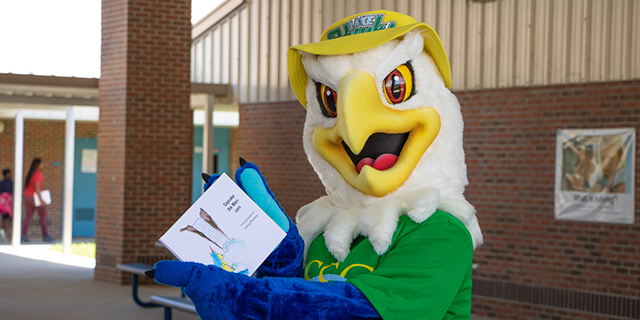 Swoop posing with the children's book

Once upon a time, there was a unicorn named Cupcake.  She lived up in the clouds, where she attended unicorn school.  But each day, she looked down at the earth and wanted to go there. That’s how the story of Cupcake the Mer-icorn begins.

“Cupcake the Mer-icorn” and “The Unicorn, the Mermaid, and the Wolf” are bothshort stories written by students in the Golden Eagles Club at Leesburg Elementary with the help of Amber Karlins, an LSSC English professor. The club, funded by a 21st Century Grant the school earned two years ago, offers after-school tutoring.

This past Tuesday, Amber Karlins and a group from Lake-Sumter State College, including Swoop the Lakehawk, visited Leesburg Elementary to give the students an actual book of the story they wrote.

“Writing is something that has brought me so much joy,” said Karlins. “It was such a gift to get to see that same joy on the students’ faces when they first saw their books.”

Karlins had previously visited the Golden Eagles Club to teach them about the key components of a successful story – protagonist, antagonist, objective, conflict, and resolution. She then brainstormed ideas for stories with the children and split them into groups to work on a portion of the stories.

“After seeing their finished stories, I was so impressed and I knew that I had to do something more with their work,” said Karlins. “I edited them for spelling and grammar, streamlined the narrative, and reached out to Jackie Pierce for help with illustrating the stories.”

Jackie Pierce, also an LSSC English professor, divided the stories into scenes and went to work making the student’s requests a visual reality.

“The students were clear that they wanted a mermaid with purple hair,” said Pierce. “They also included specifics such as bags of Takis hot chips and the rainstorm of chocolate and treats, so parts of the illustration came very easily. The biggest challenge was the character of “a black panther,” but they gave me some creative latitude, and that’s how Marvel’s “Black Panther”, T’Challa, ended up in one of the books.”

“It was such a treat to see the individual students recognize some of their own contributions – like the Black Panther and the purple hair,” added Pierce.

“Our students were so excited to see the final product,” said Heather Gelb, principal of Leesburg Elementary School. “This was an important project to help build a love for reading and writing. It is something they will always remember. We are thankful for our partnership with LSSC, which made this possible.”