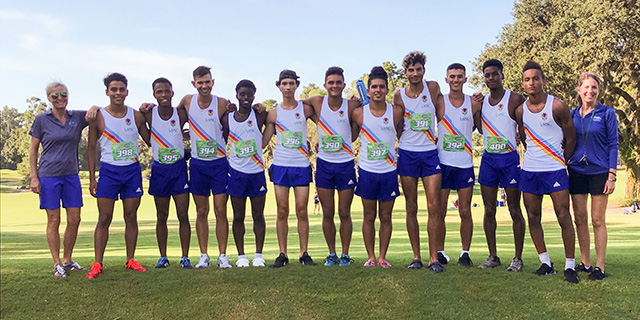 The Lake-Sumter State College men’s and women’s cross country teams started the regular season schedule at the Mountain Dew Invitational this past weekend.

The men’s field consisted of over 300 runners from different collegiate divisions and marked the first time the runners had competed at an 8k distance. Nicholas Khan was the top finisher for the Lakehawks coming in fourth with a time of 29:01. Khan was quickly followed by teammates Adolfo Saucedo-Flores, Ernesto Velasquez, William Troupe and Nicholas Atkinson who placed 5-8 respectively.

“I was very happy with the way the men ran as a team and pushed each other on the course,” said Head Coach, Cristy Snellgroves. “This team has really bonded in a relatively short time which I think will really show as we move through the season.”

With a total team score of 658, the men’s team ran themselves into the history books taking first place at the Invitational. The average finishing time for the Lakehawks was 29:25, 00:06 better than Seminole State, who came in second.

“It is going to be really exciting to see where this team goes over the next couple of weeks when they really hit their stride,” Snellgroves added.

The Lake-Sumter women’s team continues to improve every week. Another big field of runners on the women’s side with just under 300 participants. The top finisher for LSSC was Kyja Williams who finished in 22:48 for 14th place. Williams is currently making the transition from high school basketball star to collegiate cross country runner.

“Kyja is a remarkable young woman who inspires us every day with her can-do spirit,” Snellgroves said. Neelyam Lugo finished inside the top 25 with a time of 23:44.

The Lakehawks finished fifth in total team score while Pasco-Hernando took home the top spot as a team with an average 5k time of 21:11.